Toledo: the stair-master of Europa

Once upon a time, in a little old town called Munich, there was a singer who was desolate, poor, and had three days to waste before flying back to the US of A. Along comes a magical maiden from Toledo–her name was Vicki. Sound familiar from previous bloggage? Vicki and I got along incredibly well as travel buddies in Munich, and we kept in touch through the wonders of facebook ever since then. When I told her I was coming to Madrid, she immediately said, “Well you have to visit Toledo, too.” So I took the twenty minute train-ride from Madrid to Toledo on Saturday afternoon to join her.

Vicki is very lucky, as her apartment sits in the heart of the walled city of Toledo, although this meant an uphill climb from the train station. I willingly abandoned my heels for the day and a night I stayed with her, as Toledo’s roads are not only hilly but also cobble-stoned. Our first evening we attempted to cook an Italian meal with homemade pasta sauce, endless noodles, garlic bread (big emphasis on the garlic), salad, and strawberries. This was fairly successful, minus a lot of burnt garlic because I forgot just how powerful European stove tops are

note: when cooking abroad in Europa, chances are you need less power/heat than you need. Far better to start small and build your way up.

A ton of American television shows are popular with the youth culture in Spain. Some I understand like Friends, Gilmore Girls, The Simpsons–these are shows that the Germans like, too. However, a lot of shows that most Americans consider trash and/or guilty pleasures, the Spanish LOVE. These include but are not limited to: Jersey Shore, Dance Moms (roughly translated as “I Want To Dance, Mom!”), 16 and pregnant, and Toddlers and Tiaras. According to Vicki, a lot of Spaniards wonder if that’s what American culture is really like, and it’s a tough to answer–we do, as a culture, thrive on spectacle, but one would hope there is enough sanity to outweigh the truly crazy.

Vicki and I planned our route around the city early in the morning. Toledo is not a big city–in fact, as we proved with our day trip, one can really cover the altstadt (which is within the walls) in a day. If you take a look at the map, you can follow our route easily. I will offer a caveat that the city is very, very hilly. As I discovered upon my arrival, Toledo runs all uphill, and I can only compare it to a stair-master. Your buns will get the workout of a lifetime, so just be prepared with comfortable shoes that have good traction.

We started on Paseo de Recaredo, which is probably the flattest road in Toledo, and we went counter-clockwise. Our first big landmark was Puente de San Martin which is the old bridge that links the walled city of Toledo to the West. The bridge was completed sometime in the 14th century. The view of the countryside was picturesque. 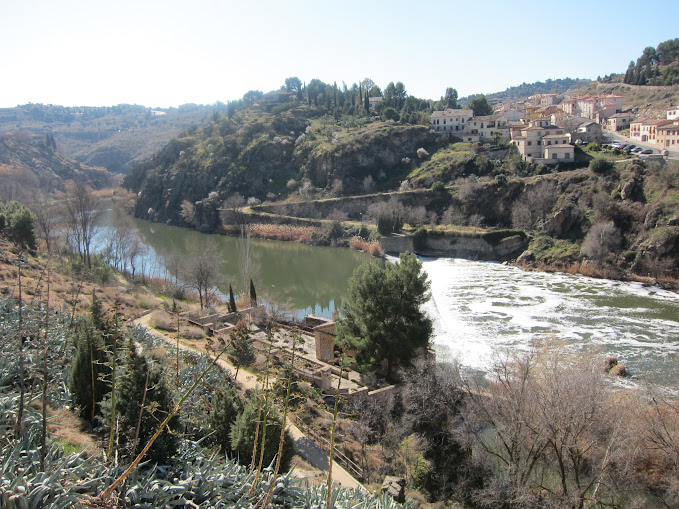 We then proceeded to San Juan de los Reyes. The monastery here is not only beautiful but also fairly unique–well worth a couple euros. Firstly, inside the church was impressive enough–the walls were ornately carved, and there were some beautiful paintings on display. The construction on the monastery was started mid 15th century and completed/dedicated early 16th century. The real highlight is the cloisters. Fragrant orange trees grow there, and the whole area was so well kept. I couldn’t help but think that this was something out of Brian Jacque’s Redwall Abbey. 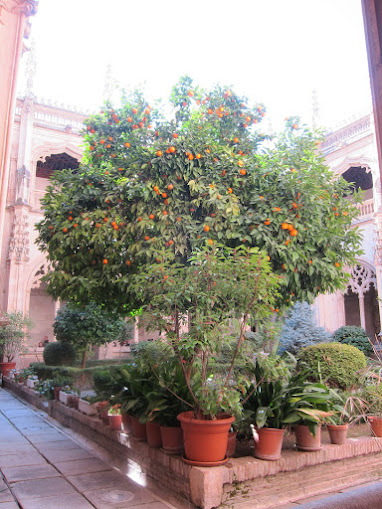 The cloisters at the monastery

Additionally, up on the second story, you can see all these incredible gargoyle animals that surround the inner walls of the cloisters. These are not the typical grotesque gothic creatures but well-crafted, identifiable animals like horses, lizards, and monkeys.

Further down the road, we visited Santa María la Blanca, which is a former synagogue now-turned museum. Dating back to the 12th century, it is said to be the oldest still-standing synagogue in Europe. The museum displayed some vibrant, impressionistic paintings and drawings along with the history–all in Spanish. All held symbolic meanings within the depicted images, and all had some sort of of Hebrew. 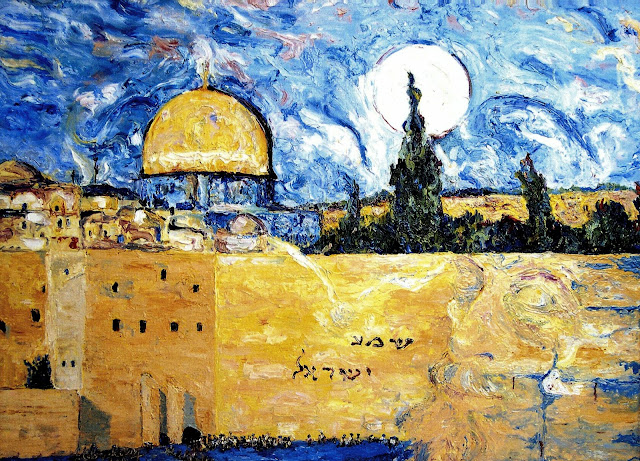 Can you spot Yahweh, his people, and the angel bearing Yahweh's blessing?

I didn’t comment on this before when writing about Madrid, but even in places where tourism is highly prevalent, very little English is spoken or written for the sake of the tourists. It was very frustrating navigating my way around Madrid, because although I am fairly tri-lingual, Spanish is not one of my languages, and there was a lot that I didn’t understand when reading plaques or bulletins. Thankfully, Vicki readily translated anything I had a question about. She commented also that Spain is trying very hard to become more tourist-friendly, but it’s a slow effort. The transition is hard for a country that was closed off to the world under dictatorship in the 20th century. Even more so, this is hard for a country that takes so much pride in its language and its various dialects. Everyone wants their language to be preserved. However as much as I hate to admit it, English is the international language, and tourism is the best way to help Spain’s economy. To have better tourism, a country needs to be accessible to other cultures, too.

Our route then took us further into the city where we had a marzipan break. I don’t think many people know this about me, even my own friends, but I am obsessed with marzipan. Ever since I was a small child, I have been known to eat marzipan until I was sick to my stomach. Living in Salzburg, I used to buy a small marzipan candy daily (a great way to gain weight). Here in Toledo, they also specialize in marzipan. In case anyone wants to know about the history of marzipan, its varieties, why it is not almond paste, etc., go here. The big difference from an eating perspective is that Spanish marzipan is sweeter and smoother–almost dough-like or rolled in with dough and baked. German marzipan is grittier and not as sweet. To be honest, I prefer the German marzipan, but that may be because they like to combine it with chocolate.

Revitalized by our sugar high, we proceeded to Iglesia de los Jesuitas, aka the church of the Jesuits. This is a newer church in Toledo built in the 18th century. Inside it is not nearly as elaborate as the Cathedral or the monastery; however, the paintings are very notable and striking against the white walls of the church. Additionally, the church had a spectacular view from the tower. We had to climb some questionably-safe stairs, but the view–especially with the azure skies–made for some great photos. 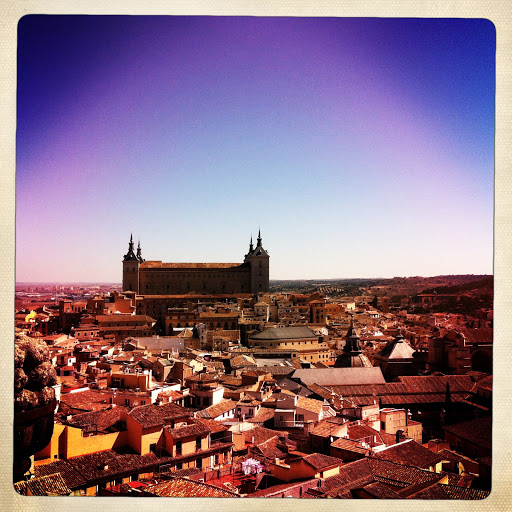 The impressive overlook of Toledo from the top of the tower.

We decided to forgo the El Greco museum, but Vicki strongly recommended we pay a couple euro to see perhaps one of El Greco’s finest works, The Burial of Count Orgaz. It is a huge mural up-close, and it is a great representation of the Italian/Byzantine fusion that El Greco masterfully crafted his artwork around. You may be asking, “who is this dude?” And I may respond, “check here.”

From there, we headed to Alcázar, which is a giant stone fortification at the highest point in Toledo. The museum there covers anything and everything a military fanatic could want. Vicki and I agreed that had it not been for free admittance on Sundays, we probably would not have gone. It was exponentially frustrating finding our way around the museum when the map was poorly marked, the guides not helpful, and the signage conflicting. On the plus side, seeing all the armor was very cool. The exhibit was very similar to the one at the Palacio Real except much more extensive. If a person wanted to see the whole museum, it could take several hours; however, Vicki and I saw what we wanted to in about fifty minutes and spent another thirty minutes trying to find an exit.

We ended the day at the Cathedral which is the masterpiece of Toledo. It is immense; I think I spent about an hour and a half touring the Cathedral on my own and taking in all the detail from the magnificent stained glass windows to the two organ consoles to the resplendent gold altar–and that is just in the center of the church. The church has a small museum with paintings from the Renaissance including more El Greco works, and there are even larger cloisters outside with soaring archways that frame time-worn murals. 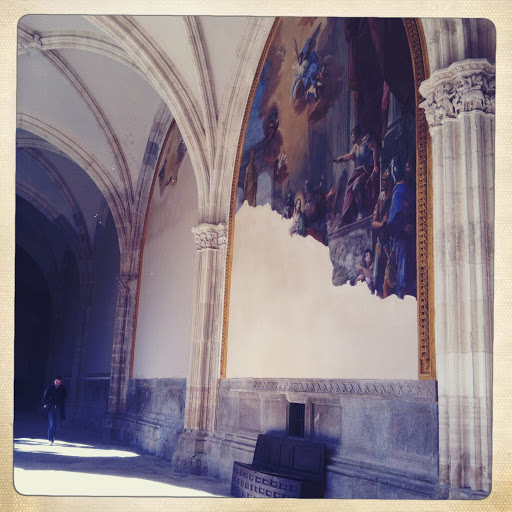 Walking outside near the cloisters

As exceptional as the construction and artistry is at the Cathedral, I have no idea how the congregation manages to focus on prayer. If it were me, I would be distracted by a dozen new things every single Sunday looking around from the pews.

To have one last hurrah together, Vikki came back with me to Madrid and stayed with me at AdrianaLia’s apartment. We went out to Mercado de San Miguel for a light supper, and then tried to go to sleep early as we intended to go to Museo del Prado the next morning. This was not to pass, firstly because we both overslept by several hours, but secondly because the line for the Prado was over an hour and a half long just to get into the building. We quickly did some re-thinking and map-checking, and we decided on Museo Reina Sofia, another art museum very close to the Prado. As wonderful as the Prado is said to be, I found the Reina Sofia highly satisfying. There is a lot of modern art which reminds me strongly of the High Museum in Atlanta. Additionally, they have some of my favorite Salvador Dali and Picasso works, including Guernica. Once again my student ID came in handy, and both Vikki and I got in for FREE. In my opinion, even if you find modern art confusing, frustrating, and/or pointless, for the price of FREE (or a little more should you not have your student ID) the museum is worth a visit to see and learn more about Spanish art which we do not have a lot of floating around in the US. In fact I think the High probably has the best Picasso exhibit on display right now.

I have yet to understand the photography rules in Spain, because while every other location in Europe that I have visited has strict no camera–even without flash–rules, every single custodian seemed to turn a blind eye to people taking pictures left and right, with and without flash, in Reina Sofia. Out of respect, from one artist to a lot of dead ones, I opted not to take photographs and bought a book instead. I would recommend likewise to other tourists. If you really like the painting, then buy a postcard and then keep it, send it, scan it, but be respectful of the artist (dead or alive) and support the museum. Reina Sofia does have a large amount of their exhibits posted online, should anyone want a look-thru.

In two hours, we only made it through about a third of the museum before I had to go back and pack for my flight and Vikki had to take the train back to Toledo. Goodbyes and departures were hurried and blurred; everything went as planned. I finally arrived in Stuttgart around 10PM on Monday, March 12th.

End note: Vicki is perhaps the best tour guide in Toledo. Should you need a reliable, charming guide or translator, she is available!